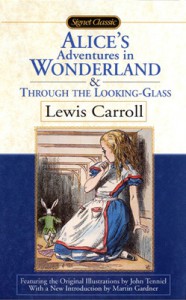 One day, a young girl named Alice is sitting on the riverbank with her sister, when she sees a curious looking white rabbit. She soon after falls into the magical world of Wonderland, where she meets a series of strange creatures. (source)

I read this several years ago, but for some reason really was not impressed at all. I decided to give it another try this past week. I was anxious to get back into reading but wanted to read something that wouldn't completely consume my attention. While I definitely enjoyed this more than I did the first time around, this was a book that I liked, but not quite enough to be glued to its pages at all times. It was exactly what I wanted!

My favorite part of this book was all of the word play. I'm not usually big on rhyming or poetry but the little mixed up sayings in this book really amused me. I found them to be pretty clever and silly enough to make me chuckle, even though they weren't LOL-worthy.

I do have to say, though, I found pretty much every character to be annoying. Alice, in particular, tried my patience. While I realize that she is a child who's wandering around in a place that must be confusing and overwhelming, I found her helplessness to be very irritating. For some reason, this trait of hers has never annoyed me when watching the film adaptations, but when reading the book it just drove me up a wall!

Overall, this time around, I found Alice in Wonderland to be a cute little story and just the right distraction for me at this particular time in my life. I'm glad I took advantage of this opportunity to re-read it! Though this certainly was not the best book I've ever read, it's likeable enough and it's one that I'll gladly read to my daughter one day if she shows an interest in it.